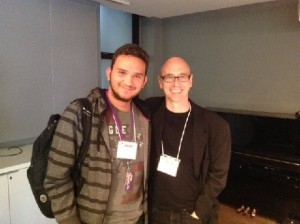 Tyler Grow’s remarkable journey has led him to a prestigious honor for his musical talent.

(PALM SPRINGS, FL) JULY 10, 2016— The G-Star School of the Arts for Film, Animation, and Performing Arts is proud to announce that one of its gifted students has become one of only four high school students ever to be accepted into the New York University (NYU) – American Society of Composers, Authors and Publishers (ASCAP) Film Scoring workshop in New York City.

The Big Apple is a long way from Romania, but that is the route Tyler Grow has taken to achieve this prestigious honor. As a child in Romania, Tyler faced long odds and brutal neglectful treatment in an orphanage. He suffered a severe brain injury which still provides constant reminders of his time there: he struggles with short term memory loss and also speech processing. Fortunately, these injuries did not damage his unique gift for music— it is processed on the other side of the brain.

About the G-Star School of the Arts for Film Animation, and Performing Arts

G-Star is recognized for its outstanding academics among Palm Beach County magnet schools. More than 44% of students have a G.P.A. of greater than 3.5, and one in five students carries a 4.0. The school scores higher than traditional schools in performance metrics for math, reading writing and science, averaging 22% higher average grades. Students have parlayed their academic success at G-Star  into scholarships at some of the country’s leading performing arts programs at schools like Juillard (NYC), Oxford (England), West Point, US Naval Academy at Annapolis, UCLA, NYU, Boston University, Syracuse University, Florida State University, University of Florida, University of Miami and USC.

A number of celebrities have connections to the school through their contributions of time, including Corbin Bernsen of “L.A. Law” and “Psych,” musician and vocalist Jimmy Buffett, Kevin James (“Mall Cop”), Celine Dion, Bob Dylan, Cheryl Hines of “Curb Your Enthusiasm,” and vocalist and dancer Jennifer Lopez.

The NYU-ASCAP film scoring workshop is an exciting learning experience for people like Tyler with a desire to make their mark in the industry. During the workshop, students learn more about the creative process and the technical side of producing music for film. From orchestrating to editing, students learn from some of the industry’s very best, including Sean Callery (Homeland, Elementary) and Michael Levine (Cold Case, Close to Home). Veteran core faculty member Mark Snow (X-Files, Blue Bloods) and NYU Film Scoring faculty member Ira Newborn (Naked Gun series) will be featured.

The workshop builds to a full day of recording in NYU’s cutting edge facilities with some of New York’s top musicians.

Tyler says he wants to use his experience to be a beacon of hope for other children facing those same terrible conditions in his homeland. He wants to use his platform as a way to change how people view orphaned and abandoned children and also raise awareness about children with disabilities.

For more information on the program, visit steinhardt.nyu.edu/music/summer/ascap. To learn more about the G-Star School of the Arts for Film Animation, and Performing Arts, visit gstarschool.org.