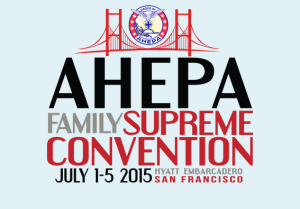 (WASHINGTON, DC) JANUARY 8, 2014— The American Hellenic Educational Progressive Association (AHEPA) is pleased to announce the location of its 2015 Supreme Convention. The event, the single most important convention uniting local and district chapters of AHEPA and the Daughters of Penelope across North America and Europe, will take place in San Francisco, California on July 1-5 at the Embarcadero Hyatt.

The Supreme Convention provides an opportunity to hold elections, present new ideas for improving membership ranks, and create new bonds between chapters and fellow AHEPANS and Daughters. The convention will include a grand ball, a variety of panels, and many networking opportunities.

AHEPA is an international educational and advocacy non-profit organization created in 1922 in Atlanta, Georgia to represent and protect the interests of newly-arrived immigrants from Greece and Greek-speaking peoples. The organization’s stated mission is “to promote Hellenism, Education, Philanthropy, Civic Responsibility, and Family and Individual Excellence.”

AHEPA National, along with District and Local chapters, provides annual scholarships and spearheads a number of philanthropic endeavors including raising funds for local non-profit charities across North America.